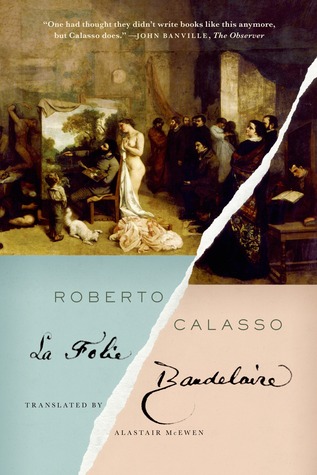 On November 16, 2012, only a few months after the American publication of Roberto Calasso’s La Folie Baudelaire, New York Times, Sunday Book Review critic John Simon would state on his review, “The book fluctuates between criticism and biography, which is fine; what is lacking, however, is a clearly conveyed thread that unites all this material”.  The remainder of Simon’s review is what at one point during my younger years I would have called “a monument to the obtuseness of the professional critic who calls ‘obscurantism’ any stylistic conceptualization his enfeebled mind cannot grasp.”  Suffice to say, he wasn’t impressed. Other reviews of Calasso’s book were equally cool.  Even those that seem to praise the book for all its apparent merits repeatedly fail to recognize the conceptual thread that unites this formidable piece of literary criticism.  For structured almost as one of the eighteenth century folies parisiennes, from which the title of the book is derived, the concept that indisputably unites Calasso’s La Folie Baudelaire is form.

Noting Baudelaire’s ability to infuse his poetry with the sense of the immediate and the intimate Calasso likens Baudelaire’s work to pictures.  Speaking of Baudelaire’s prose, which would be instrumental for the development of his verse, Calasso compares it to descriptions of watercolors.  It is then this devotion to images, which coupled with Baudelaire’s penchant for drawing on analogies that gives Baudelaire’s work not only that sense of immediacy, but also its impervious form. If Baudelaire’s poems present themselves as tableaux parisiens, Calasso affirms, it is because “they are always pictures in which the frame unleashes in the picture itself an energy whose original would not otherwise be present”.  Consequently, by expanding this idea of Baudelaire’s work as frame and pictures La Folie Baudelaire seeks to reexamine Baudelaire’s work by comparing it to the work of the artists that surrounded him, and in turn through him reexamine the work of those selfsame artists. It is in this manner that Calasso presents the reader with the works of Jean-Auguste-Dominique Ingres, Eugene Delacroix, Constantin Guys, Edgar Degas, and Édouard Manet.

Arrayed as though they were guests inside one of those “bizarre pavilions” or folies, Calasso moves from one artist or writer to another with a finesse that allows the reader to forget the critical aspect of the narrative. In doing so Calasso touches upon a myriad of other major and minor literary and artistic figures that reflect back to Baudelaire and Calasso’s conceptual formulation of form. It is no wonder then that almost every single critic who has reviewed this book has been unable to grasp its fundamental message.   More than a critical analysis of the work of Baudelaire, what La Folie Baudelaire seeks to do is to reveal the essence of the modern within literature.  An essence, which Calasso seems to assure us, sprung not only from the heart of Baudelaire’s poetry but in fact from the creative interconnectivity within this folie.  For like the paintings of Ingres which present an “Egyptian timelessness”, an “absolute plasticity, [that] seems as the beginning and end of all things”, the poetry of Baudelaire, Calasso affirms, is almost always perfect in form.  Dozens of other examples abound through out the book, which offer their own theoretical implications, but in one way or another they always point back to that constant structural aspect of Baudelaire’s poetry—that, “Intelligence transformed, incorporated into matter”. More important for the reader of today, Calasso does not fail to note, is that this aspect of Baudelaire’s poetry would influence literature till the present.

Within the field of comparative literature it is rare to come across a great piece of criticism that can encompass so much knowledge and not fall into the pedantic. If this books seems to trail off as though the narrative could continue forever it is simply because this book was not written through the lens of an “expert”, but rather through the lens of someone who has lived with these literary and visual masterpieces with and within him for a very long time.  To call Roberto Calasso, who is every sense of the word a consummate intellectual, an expert would be insult.  To expect him to write like a common academic shows the vilest contempt for culture and literature.

This is a text widget, which allows you to add text or HTML to your sidebar. You can use them to display text, links, images, HTML, or a combination of these. Edit them in the Widget section of the Customizer.
%d bloggers like this: