It appears as though many years had to transpire in order for me to fully appreciate the art of Allen Ginsberg.  As a high school freshman and concerned with all things forbidden I looked up the list of banned books and made it a point to read them.  After Tropic of Cancer I finally moved on to Ginsberg’s ‘Howl.’ I gave the poem a quick read and remember tossing it aside, unimpressed by Ginsberg’s shock tactics.  After all, I was growing in a generation which not only well aware that the hippies and beats had gone corporate, but more importantly I was growing up in a generation that was still reeling in from the AIDS epidemic and was suddenly confronted with a new never-ending war on terror.  So, I tossed the book aside and never gave more than a few passing thoughts until this year.  Now, as an adult, I reread both Howl and Kaddish (amongst Ginsberg’s other poems).  This time around, however, I sobbed with the grief found in Kaddish and was exhilarated beyond words with the anger and outrage of Howl.

Madness is the theme that both Kaddish and Howl share.  In the former it is a very personal kind of madness; it is the real, clinical schizophrenia suffered by Ginsberg’s mother, the latter on the other hand deals with the madness of his friend Carl Salomon and carries the theme as a metaphor for the madness of his peers, his generation.  Of the two, I cannot say one is greater in accomplishments than the other, for although written only a few years apart from each other they differ greatly in style, meter, and mood.  Howl is a tempest of words and images that carry you through a journey across town and country, across bedrooms and rooftops, across America itself, and ends in a wild refutation of American greed and hypocrisy.  Kaddish on the other hand is a terse, carefully wrought, double narrative that begins by reconstructing his mother’s life as he knows it, as he himself has experience it (“Dreaming back thru life, Your time—and mine accelerating toward Apocalypse…”) and ends in prayer. 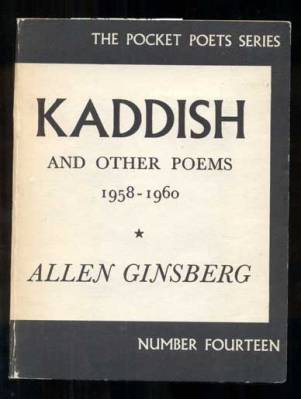 As mentioned earlier both poems have a greatness of their own and will stand the test of time out of their individual merits.  Notwithstanding, however, both poems are interconnected and when read closely they lend light to each other.  Through Kaddish we see the poet that came to write Howl.  Reading Kaddish, Howl ceases to be merely the exalted, dissenting, and unconformist voice of a Columbia University drop out.  Through Kaddish, the personal relationship that Ginsberg had with mental illness comes all too painfully to the surface, and it becomes apparent how he like no other poet of his generation would best be suited to write about it and capture it in an art form whose restlessness, angst, and overall sense of loss, responds to our culture’s constant preoccupation with capitalist ideals and monetary success.

So what was this personal relationship the Ginsberg had with mental illness?

There was no need for me to do any research on this.  The narrative of Kaddish tells the story of his mother from the time she arrived in New York as a Russian immigrant to the time of her death in an asylum.  Gut wrenching as the narrative is, it leads us into a shared history between mother and son. First, the poem travels to the time when the poet was only 12 and his mother had what might politely be called a breakdown in public at which point he had no choice but to abandon her in a suburban hotel to her institutionalization, then her release.  The poem then discloses the mother’s violence and paranoia that brought her to physically attack her sister, who although ill had come to fulfill the role of caretaker.  Then along with his mother’s mental illness the poem illustrates the disintegration of the poet’s family life, as is reflected in the disillusionment of his brother turned lawyer, in the pain of his father who in sadness and hopelessness sought out a new family, a new wife. Finally, after there was no one left to tend to her the poem speaks of how the mother was brought back in the asylum where she ceased to recognize her own son and where she finally died.  All throughout Ginsberg describes horrible scenes of dread and degradation brought on by the madness of his mother.  Perhaps the worst and the saddest of these scenes is when his mother in her infirmity offers herself sexually by exposing her genitalia to her own son.

Kaddish in part is eulogy, elegy, biography and as part two clearly states it, a lament.  Most importantly, however, Kaddish works as a cathartic dialogue with himself as well as his dead mother. It is a grief induced attempt to communicate with her, who had already departed many years before her death, all the things that he had longed to say.  This is a poetic stripping act of love that looks bluntly at all thing to arrive finally at the poet’s own peace of mind.

I wish I knew more of Jewish doctrine but one thing is certain.  In Kaddish there are no Eastern, Buddhist rites or beliefs.  In it Ginsberg falls back unabashedly upon his Jewish roots for solace and comfort.  In it, there is no doubt.  Having arrived at his critical moment of absolute grief and relief he believes, he believes uncompromisingly in a one true God and in Death as the all obliterating and forgiving rest.

This is a text widget, which allows you to add text or HTML to your sidebar. You can use them to display text, links, images, HTML, or a combination of these. Edit them in the Widget section of the Customizer.
Loading Comments...
%d bloggers like this: